What began as a simple exercise in turning on the irrigation water to the yard culminated in an hour of yak shaving in which I actually measured the performance of my sprinklers. The well-meaning people at my City Hall had sent out an informative flyer earlier in the week with tips about conserving water during the upcoming summer, not recognizing the Siren song they would ultimately create for me by suggesting that one could measure and optimize a sprinkler system. While my engineering disease puts me at risk for over optimization to start with, I'm particularly susceptible to the temptation posed by measurement science problems.

The flyer included a link to a web address with detailed instructions for computing station timing for a yard irrigation system, sponsored by Orbit Irrigation. I wasn't about to pay for the catch cup kit they were offering, but fortunately they gave away the key specification for supplanting the commercial catch cups with something ad hoc. Off I went looking for something with a 16.25 square inch catch opening. An opening diameter of about 4.6 inch does the trick.

With some luck, it didn't take me long to find a reasonable solution. Who knew that the cottage cheese industry was secretly out to ruin the catch cup business for the irrigation industry? I no longer question why my wife has saved so many of these in a drawer in the kitchen. I now understand that they are a valuable instrument to an irrigation system measurement technician, and she must have realized that long before I did.

With catch cups in hand, I headed to the yard to make measurements. My yard has conventional pop up spray heads in the front and a bit fancier gear driven rotor heads in the back. When I installed the rotors a couple of years ago the hardware store people told me I'd have to run them a lot longer than the old pop ups, but their even spray pattern would provide better overall performance. Quite honestly, the back lawn didn't fare very well over the last summer compared to the front, so a primary goal of my measurements was to get a feel for just how much longer the recommended station timing would be for the back yard rotors. 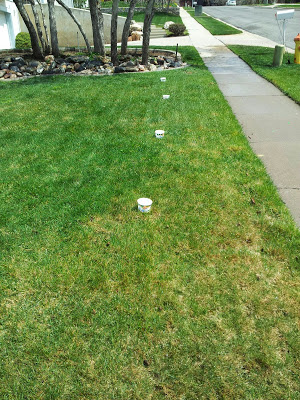 After laying out catch cups and throwing on the stations for several minutes I was ready to measure the volume of water in each cup. I debated using a tablespoon and converting the measurements to mL later, but then I remembered that there is another stash of special little plastic cups in our house has that has mL graduations built right in. Thank you, children's cold medicine people, for providing miniature graduated cylinders in every box! 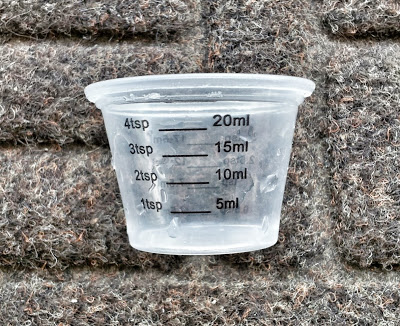 I decided to scale back the effort and only measure one station in the front and one in the back. I found the simple instructions for mapping and recording the measurements as suggested by the website to be quite helpful. 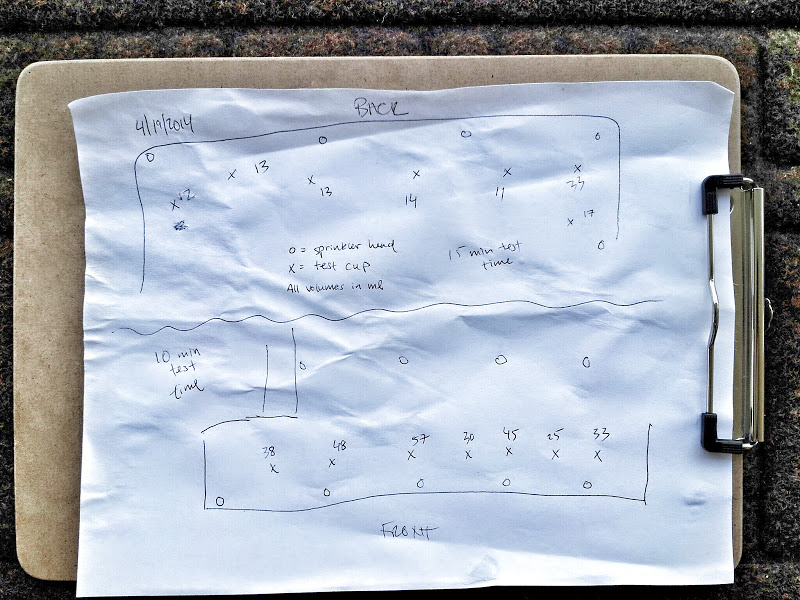 With final measurements in hand it was a simple matter to run the calculator on the website. I won't post the final recommended run times since they would be specific to my system, climate, and soil type. But I will say that, much to my surprise, the gear rotors need to run four times as long as the pop ups to deliver an equivalent volume of water to the yard. That's a lot longer than I was running them last summer when the back grass was looking so bad. And it only took me one inexpensive yak shave to figure that out.